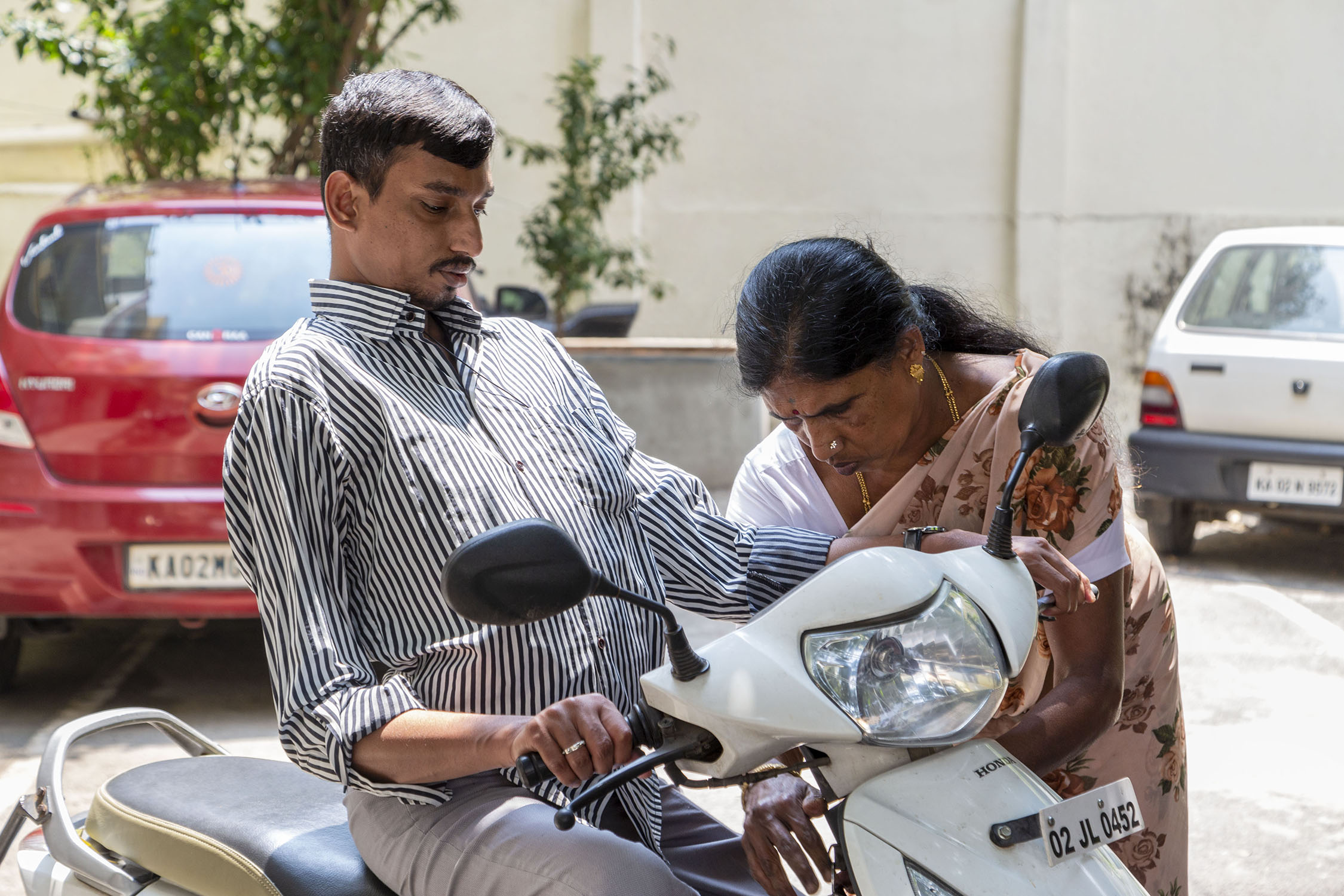 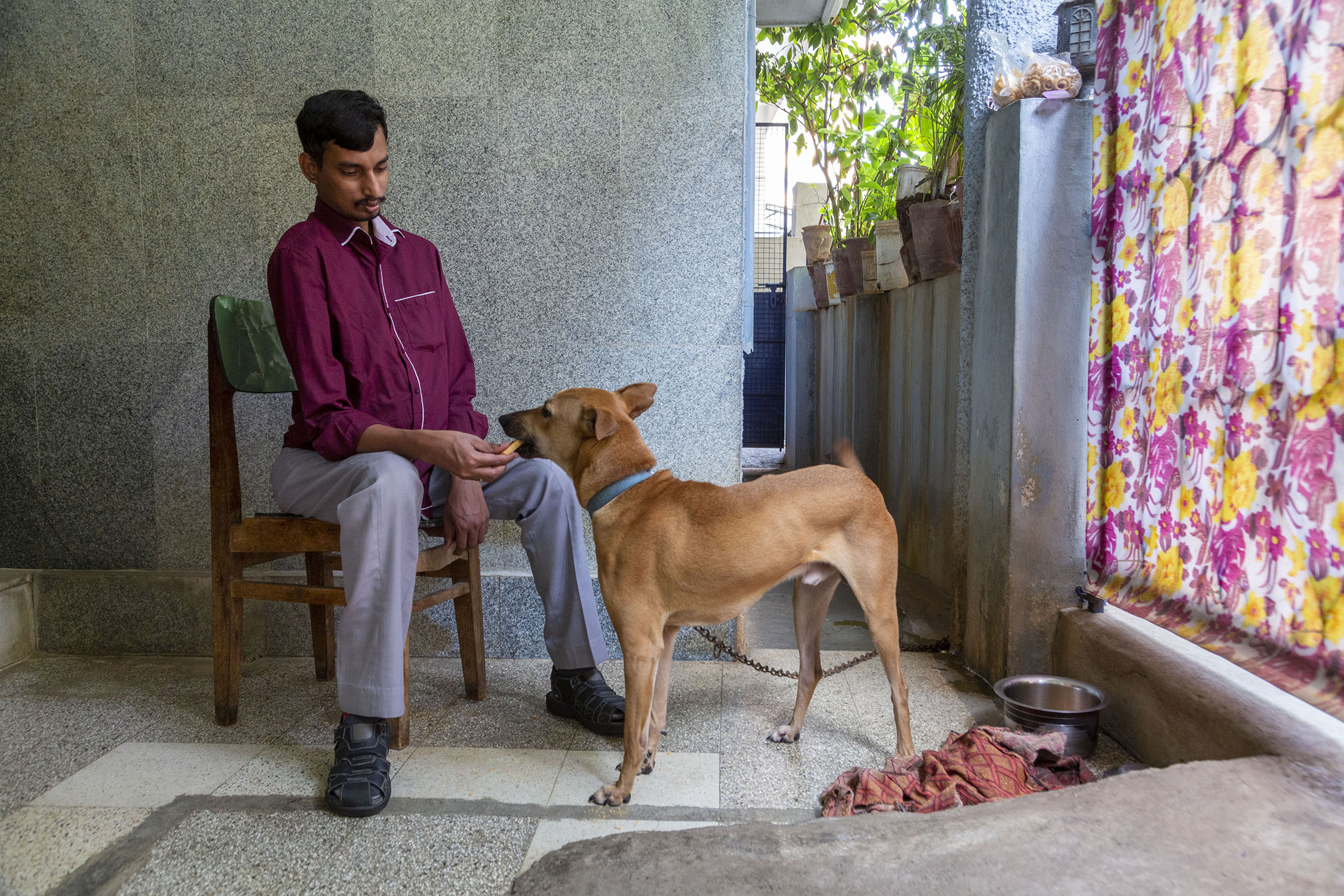 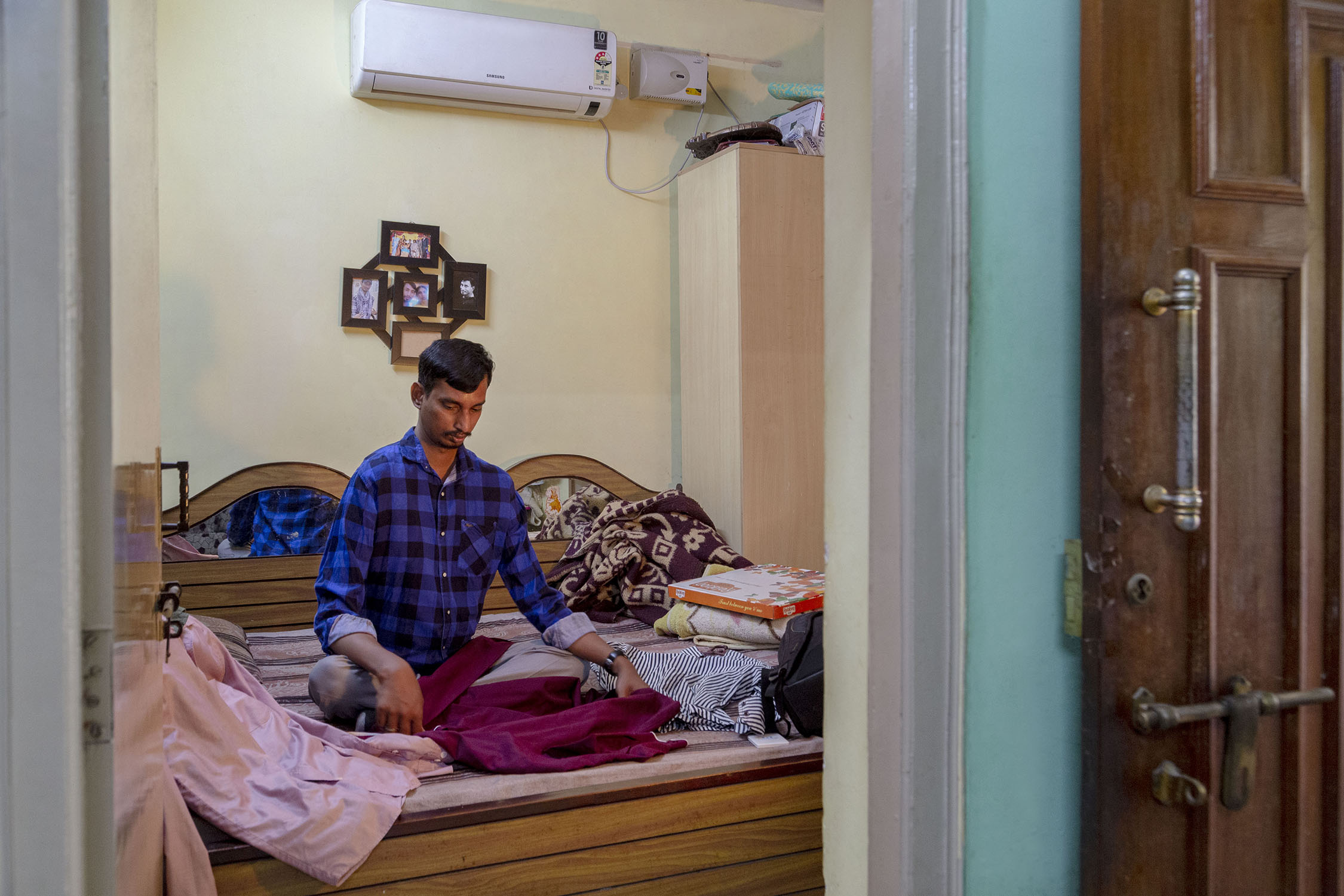 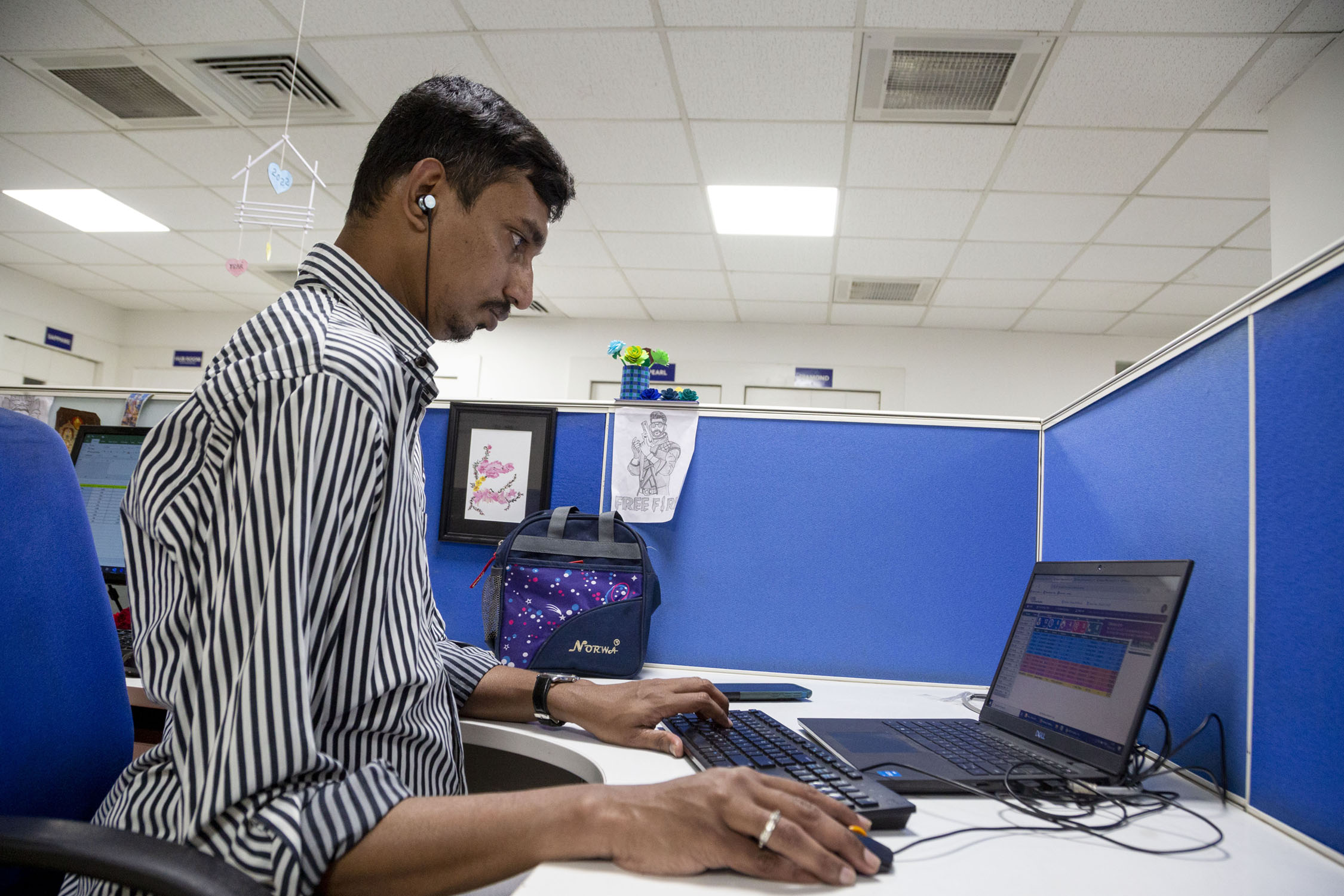 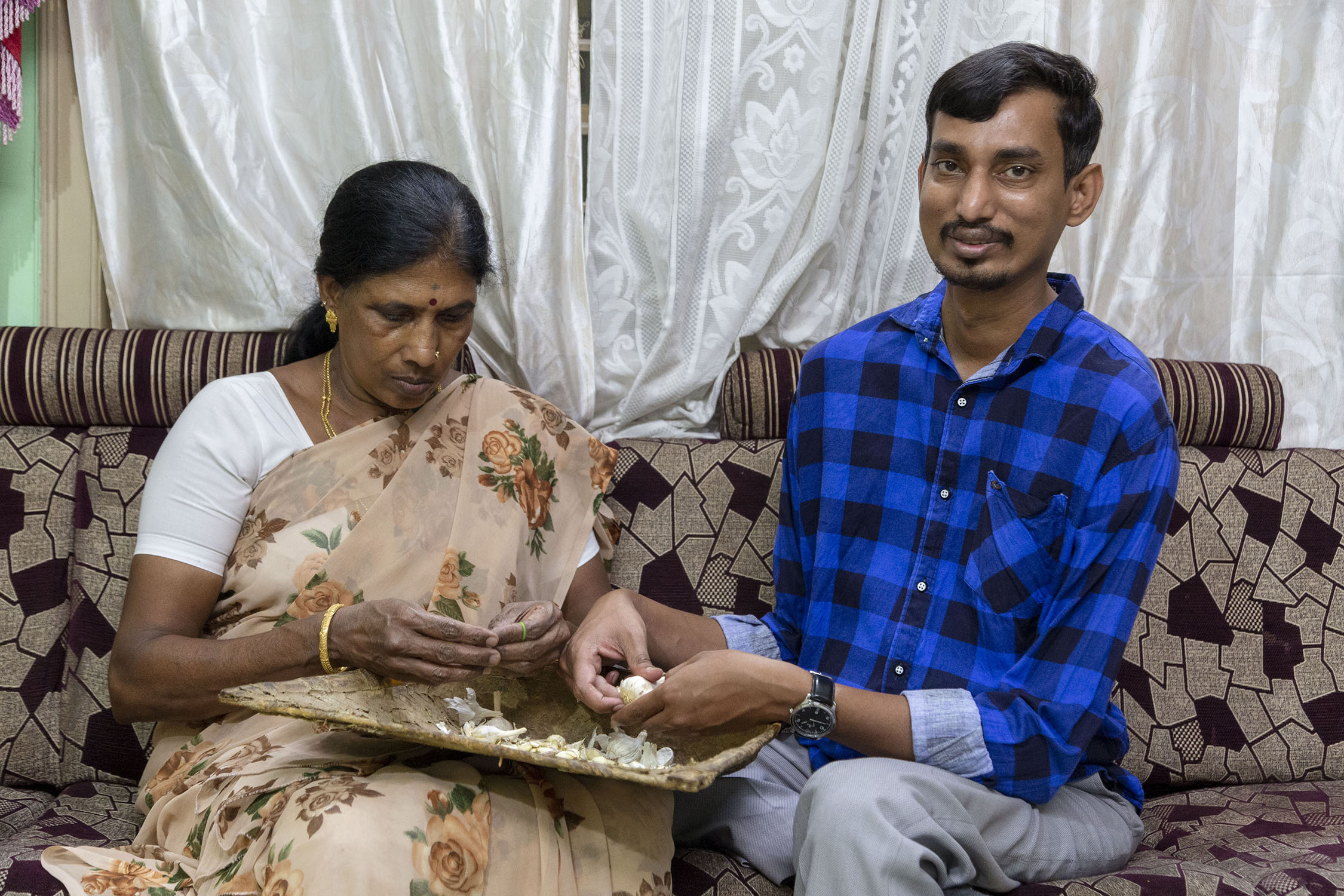 “Don’t say you can’t; just try once. You can do many things if you explore”

It was a mother’s keen observation that led to her youngest child being diagnosed with muscular dystrophy, a genetic disease that causes progressive weakness and loss of muscle mass. In his schooldays, Sunil Kumar MJ (37), who was born and raised in Bengaluru, was as mobile and active as his older siblings Rathna Mary and Anil Kumar. But once, when he was 16, as he alighted from the local bus he tripped on the steps and fell. His mother Jayamma noticed the manner in which he picked himself up. For a couple of years she had been finding his pants tearing in places that indicated he had been falling down. The bus incident convinced her that something was not right.

Jayamma and her husband Mariappa took Sunil for a medical check-up at Padmashree Hospital in Nagarabhavi. The doctor’s suspicions were confirmed after a blood test and biopsy. He told the parents, “After six months your son won’t be able to walk.” Sunil recalls: “My parents were highly disturbed, but I didn’t worry because I could do everything and didn’t feel there was anything the matter with me.”

Before long, the disease made its presence felt. After high school Sunil joined the two-year course of the Loyola Industrial Training Institute on Bannerghatta Road. “I found it hard to climb the hostel steps carrying books in one hand,” he recalls. Six months before the course ended, he caught a fever that brought him back home. His evident physical decline prompted his father to tell him, don’t bother to study anymore.

Mariappa was a real estate broker. His family lived on the first floor. The ground floor was rented to a hair salon and he planned to build the second floor. To keep his son occupied he put him in charge of supervising the construction. Sunil had his hands full because he also had to look after their flock of chickens and over 40 pigeons that he reared on the terrace! The second floor was let out to a group of bachelors. Sunil used to play games on their computer and spent so many hours on it every night that Mariappa decided to buy him a computer and an internet connection.

Sunil taught himself Word and Xcel and explored cyberspace. Anil encouraged him to browse the net to identify and repair software glitches instead of just rebooting the system. In 18 months Sunil had familiarised himself thoroughly with his computer and the virtual universe. That was when Sebastian, a fellow churchgoer who worked in Vindhya E-Infomedia in Rajajinagar, offered to take him for a job interview at Vindhya which employs hundreds of persons with disabilities. After the interview and test Sunil was brought on board.

From 2009 till date, Sunil has been thriving in Vindhya. In the beginning he had no ambition. “My dad would drop me and pick me up,” he remembers. “My only aim was to finish doing whatever task I was asked to do each day, whether it was data entry, web analysis or customer support.” But when he was made team leader and given added responsibilities with more than double his salary, it ignited his aspirations to go up the career ladder. He became Assistant Manager, Quality and Training; then Assistant Manager, Operations, and Deputy Manager in 2021. He got several performance awards at Vindhya including Overall Champion for Best Performance, and last year Rotary Club recognised him as one of the “Unsung Heroes”.

Sunil was a hero in more ways than one. He clawed his way out of a depression in 2011. Narrating his experience he says, “Ours was a love marriage. We were together for just 28 days.” Her parents were dead set against her marrying a disabled man, so much so that they filed a police complaint of kidnapping. At the police station she swore repeatedly, “I married him of my own free will.” Then her mother ‘fell ill’ and the family pleaded with her to “come home just for 10 days to look after her”. Ten days stretched to weeks. They inveigled her to initiate a divorce. A heartbroken Sunil “couldn’t eat or sleep properly for six months” until he was jolted by his parents’ words one day: “She has her parents. Here we are, right before your eyes. Don’t you want us?”

But that was in the past. Sunil is himself strong enough to “be a shoulder for someone to cry on”.  His message to society: “See what disabled persons are capable of, motivate them by giving them the right help at the right time, and they will be able to progress on their own.”