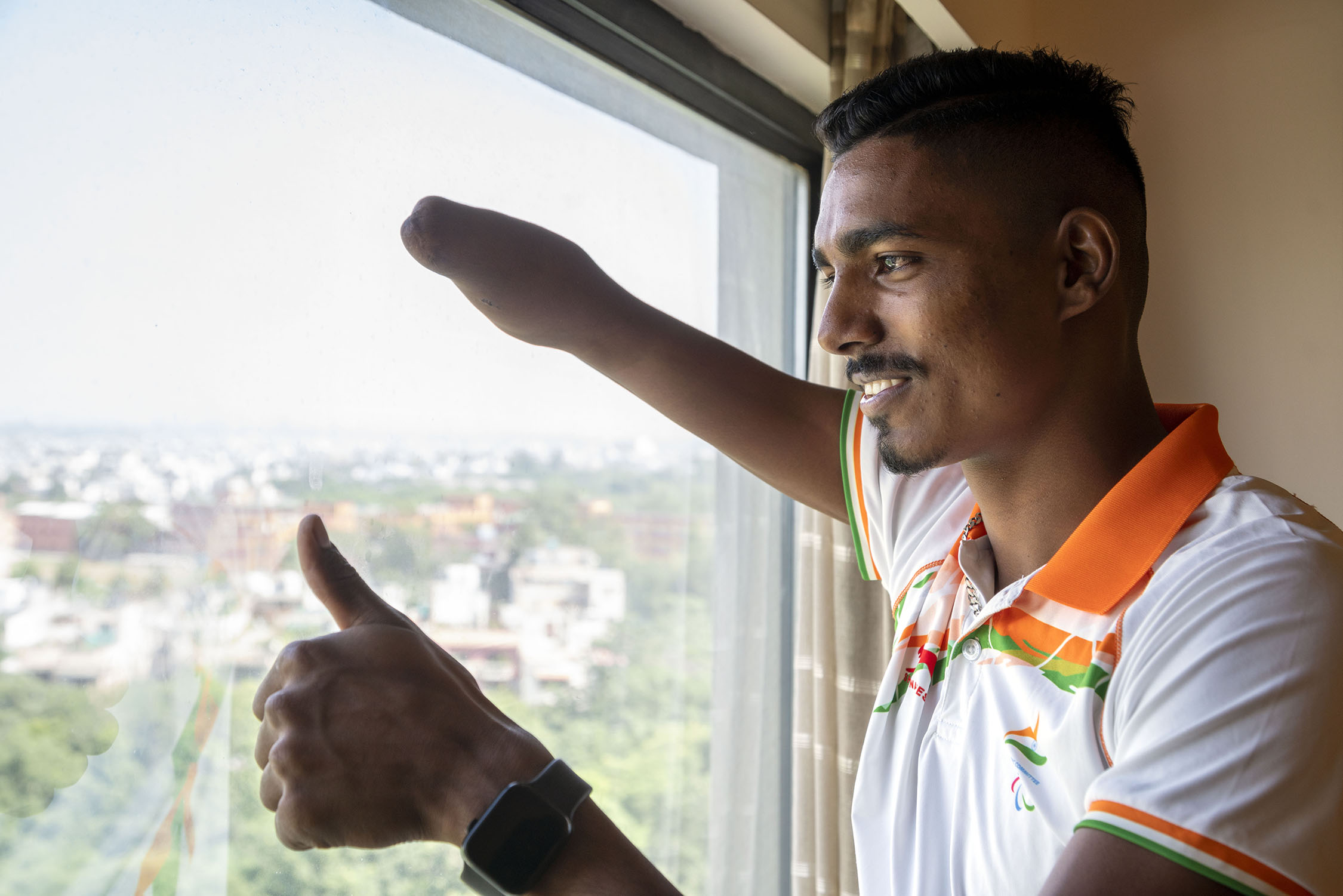 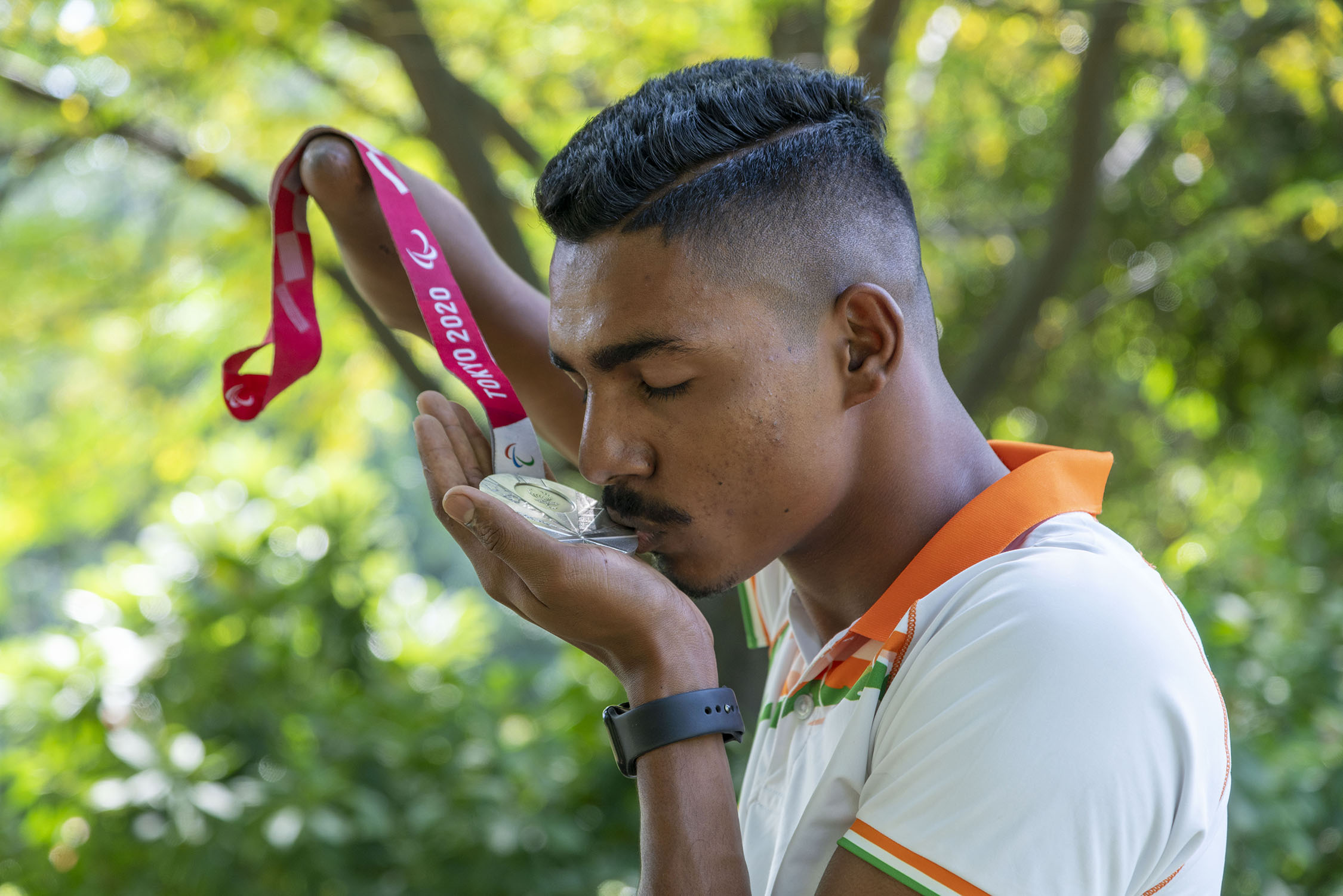 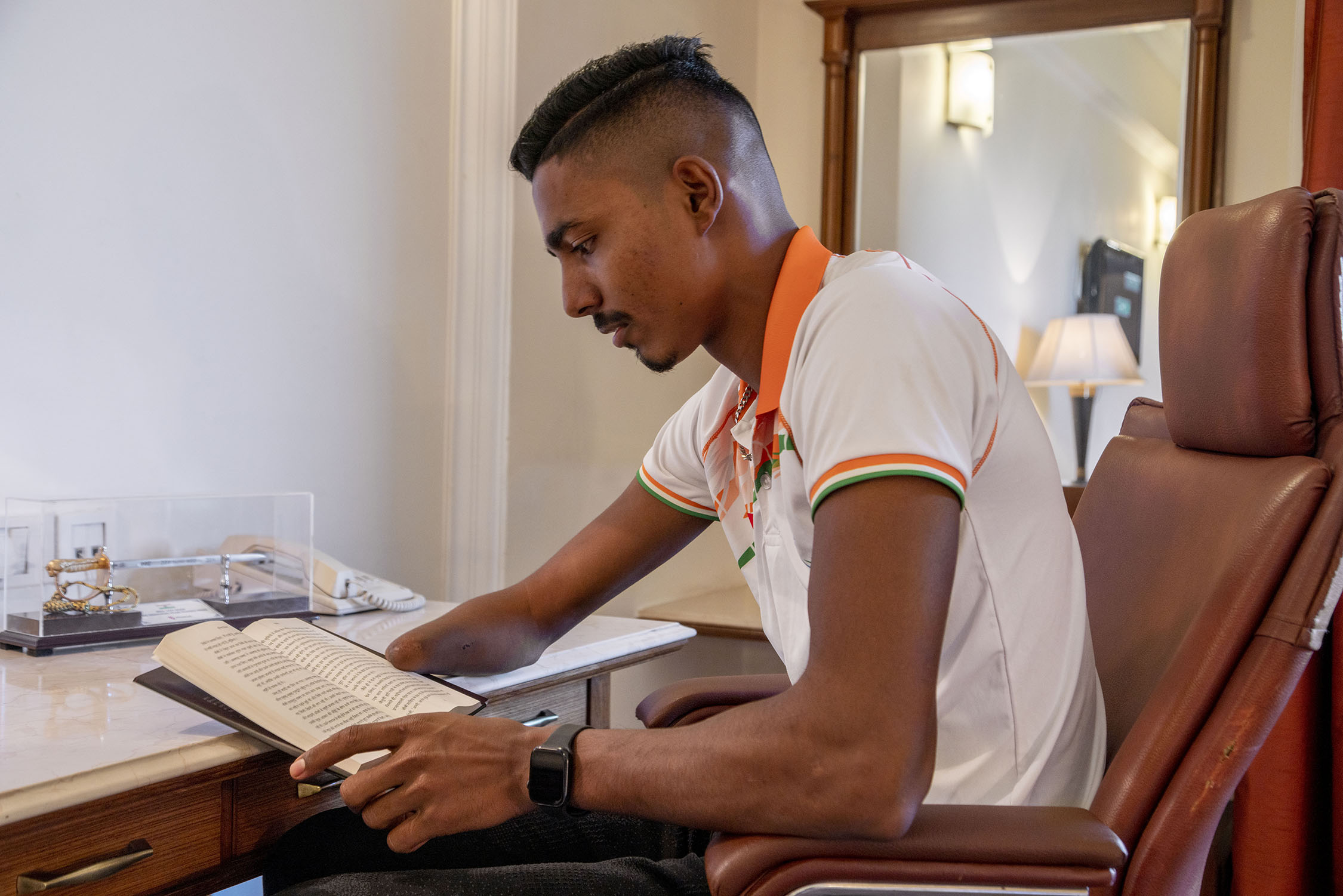 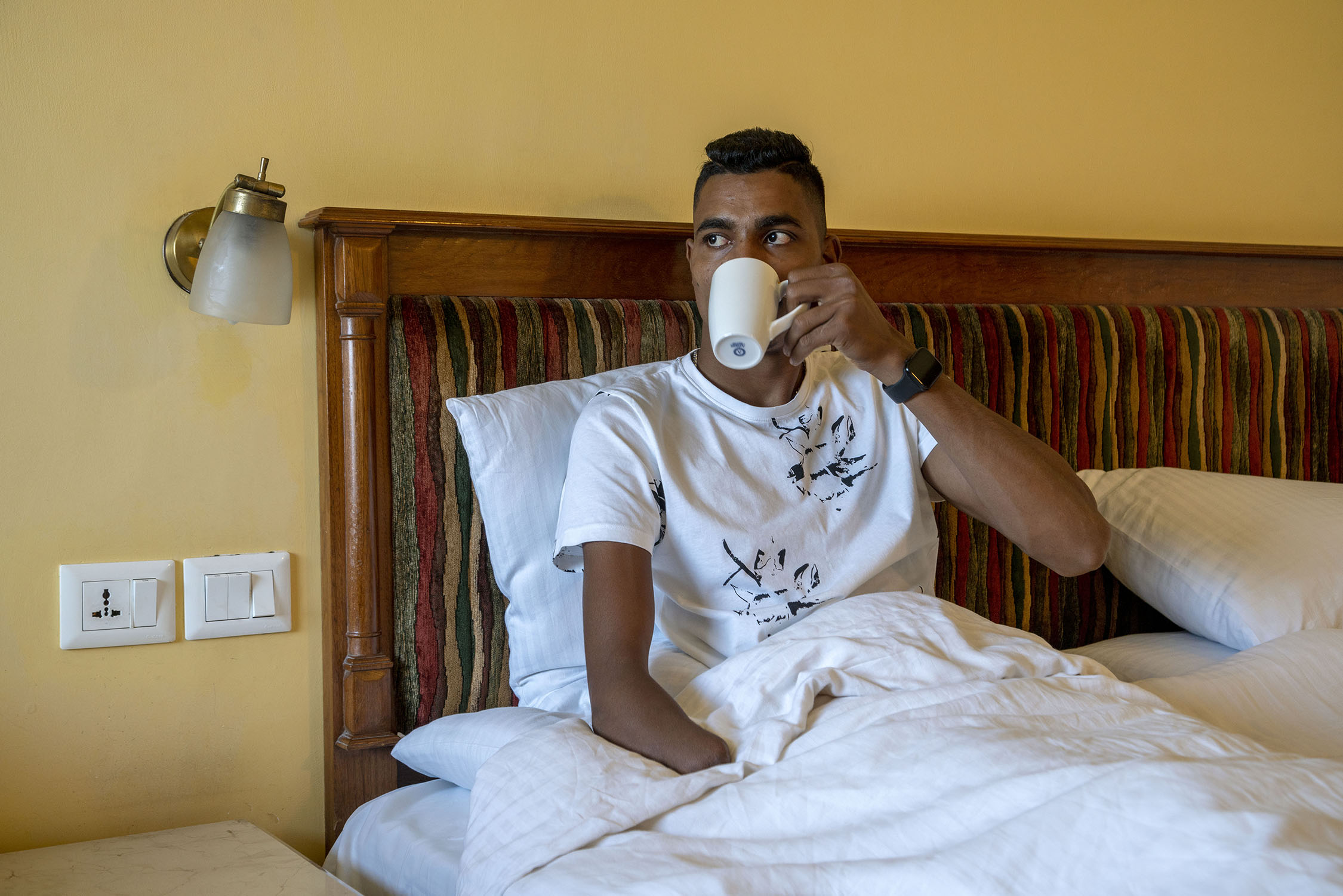 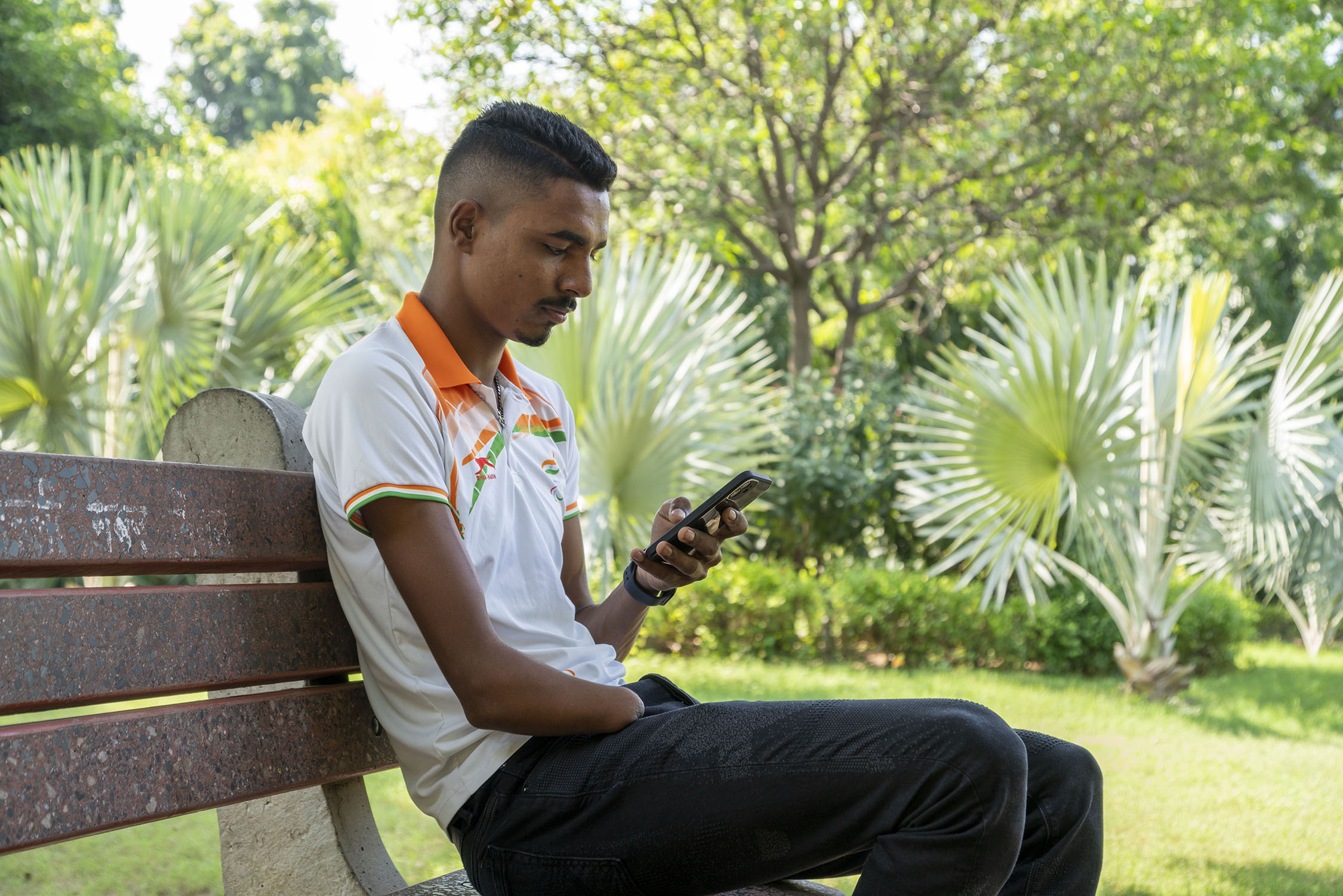 At 6 feet 4 inches, Nishad Kumar (22) stands tall, not only in height but in his outlook towards life. When photographer Vicky Roy encountered him, he was attending a sponsored event at a hotel, a felicitation of the medal winners of the Tokyo 2020 Paralympics. We interviewed him after he went back to his native village of Badaun in Himachal Pradesh.

As a fourth grader, Nishad was a playful eight-year-old who liked to run behind the khilonewala (hawker of toys) on the street and pester him. On one such day, to get Nishad off his back the toy seller told him, your mother is looking for you, go home quickly. He dashed off, so excited to learn what his mother wanted to share with him that he didn’t look where he was going. The blade of a chaff cutter made a deep cut on his hand above the wrist and it had to be amputated.

After the local government hospital had provided primary medical aid, Nishad’s father Rashpal Singh decided to get him treated in a private hospital in Hoshiarpur. Singh, a daily wage earner, struggled to pay the bed cost of Rs 100 a day, not to mention medicines and other expenses. Nishad missed school for the entire year that it took him to recover. School always brings back fond memories for him. Because his family couldn’t afford a cycle, Nishad and his sister Rama Kumari along with Nishad’s best friend Vishal, his sister and his cousin, all five used to clamber on to one cycle and wobble their way to school! Nishad recalls that when he reached 10th grade his class teacher bought him a cycle of his own!

Whenever he saw students being awarded medals by the principal before the whole school assembly he used to imagine himself in their place. “I wanted to be on stage receiving medals one day,” he says. “That drove me to try my hand at sports.” Sport was a natural choice for him since his mother, Pushpa Kumari, was an athlete herself. She introduced him to sports also to counter the kind of negative reaction he might face in public because of his disability.

Nishad first participated in athletics in Pragpur and came first in high jump, which encouraged him to pursue this particular type of field event. Although he performed well at the district and state level championships, he couldn’t secure a place in the nationals. After school his peers were busy choosing careers. Vishal got into the army. Nishad also was keen to join the armed forces but he was rejected because of his disability. It was his mother’s words that gave him confidence: “God might have planned something better for you.”

Indeed she was right. Nishad’s cousin was getting trained in tennis at Haryana’s _Tau Devi Lal Stadium_, a multi-sport stadium in Panchkula, and she referred him to the athletics coaches. Nishad recalls the first time he set eyes on the stadium. He was awestruck because he had never seen anything so big. When his family was informed that not only had he been accepted for training but that his expenses would be taken care of, his mother had tears in her eyes.

The early days were a struggle for Nishad, however. He had to sometimes sleep rough, eat free food at the gurudwara and find a different room to stay in every three months. The boy from Badaun found it very peculiar that unlike in his village, where everyone had a cow at home, here people had to buy milk, and that too in packets of different colours! Nishad gratefully remembers his coaches Naseem and Vikram who provided equipment and financial support.

Next he stayed at the National Coaching Camp in Bahalgarh for three months to prepare for the World Grand Prix in Dubai. Although he was not chosen during the selections in Bengaluru, this city was where he met his ‘god’, his future coach Satyanarayan who identified his talent and believed in him. Satyanarayan also successfully nominated him for the Olympic Gold Quest (OGQ), which helps Indian athletes prepare for the Olympics, and his training for the Paralympics started.

At the World Para Athletics Championship in Dubai, Nishad clinched a bronze medal in 2019 and gold in 2021. His latest win is silver at the 2020 Tokyo Paralympics where he set a new Asian record of 2.06m in men’s high jump.

When at home, Nishad enjoys a game of cricket with his father, and loves listening to Punjabi music. Now he is all set for the 2022 Asian Games in China.