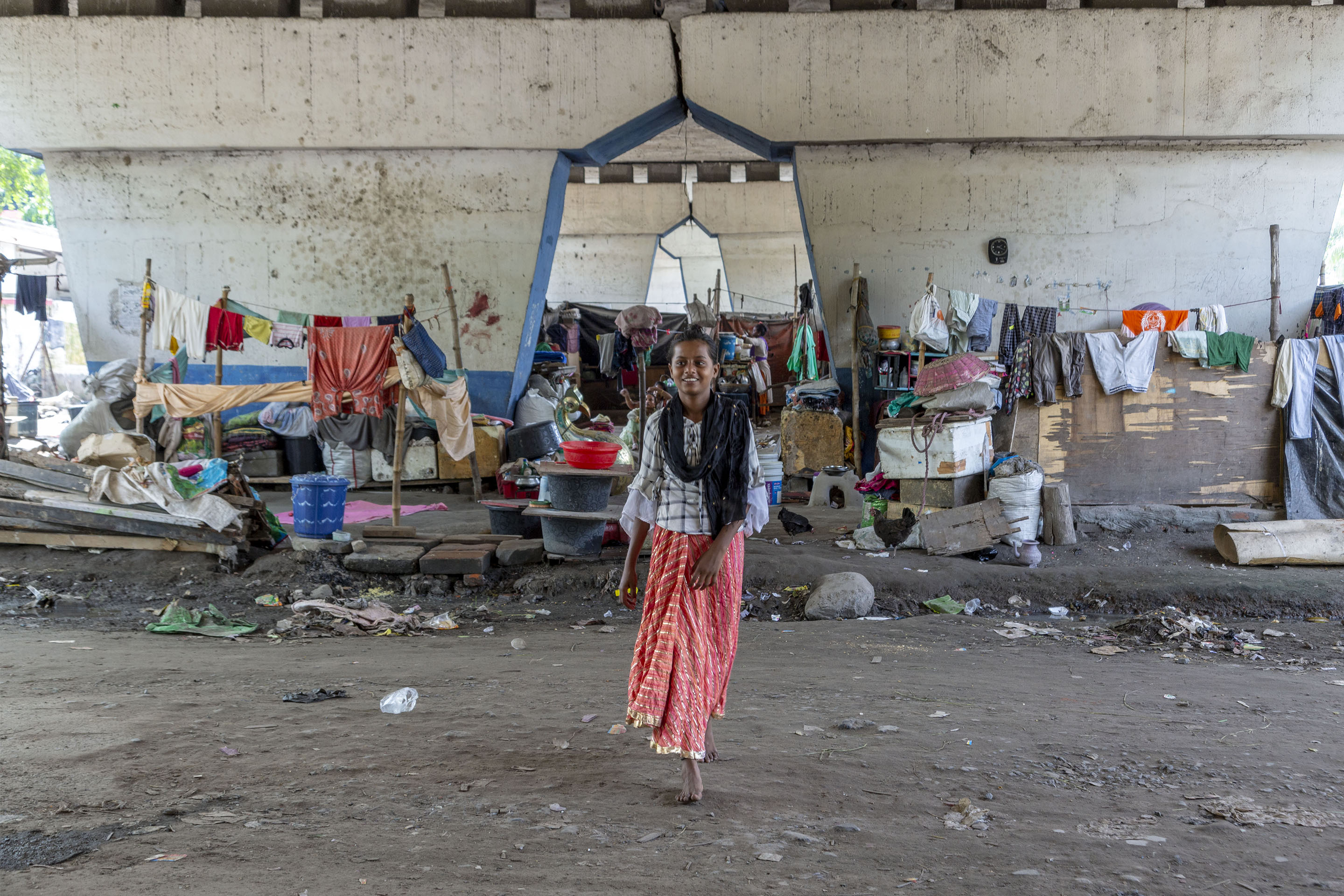 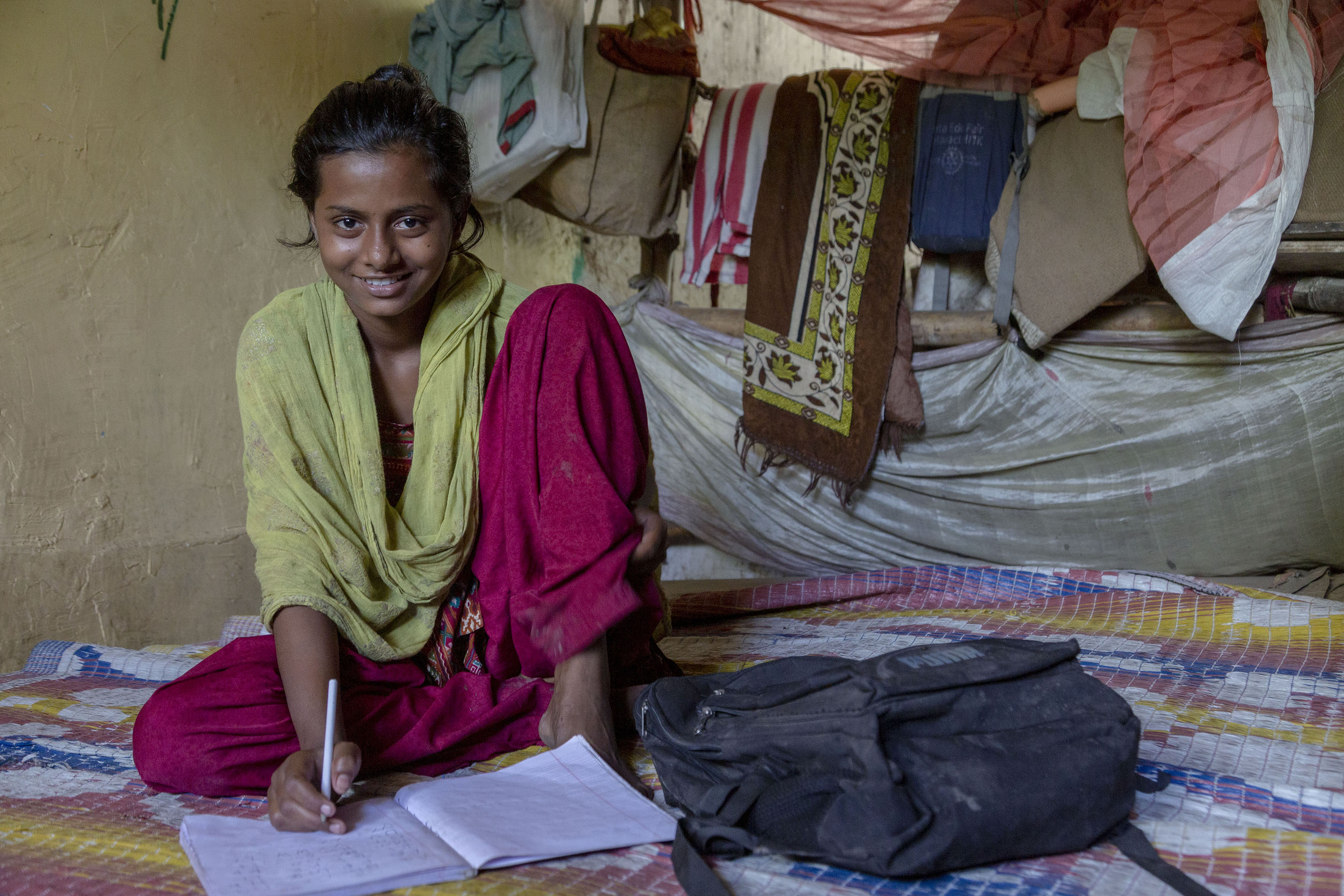 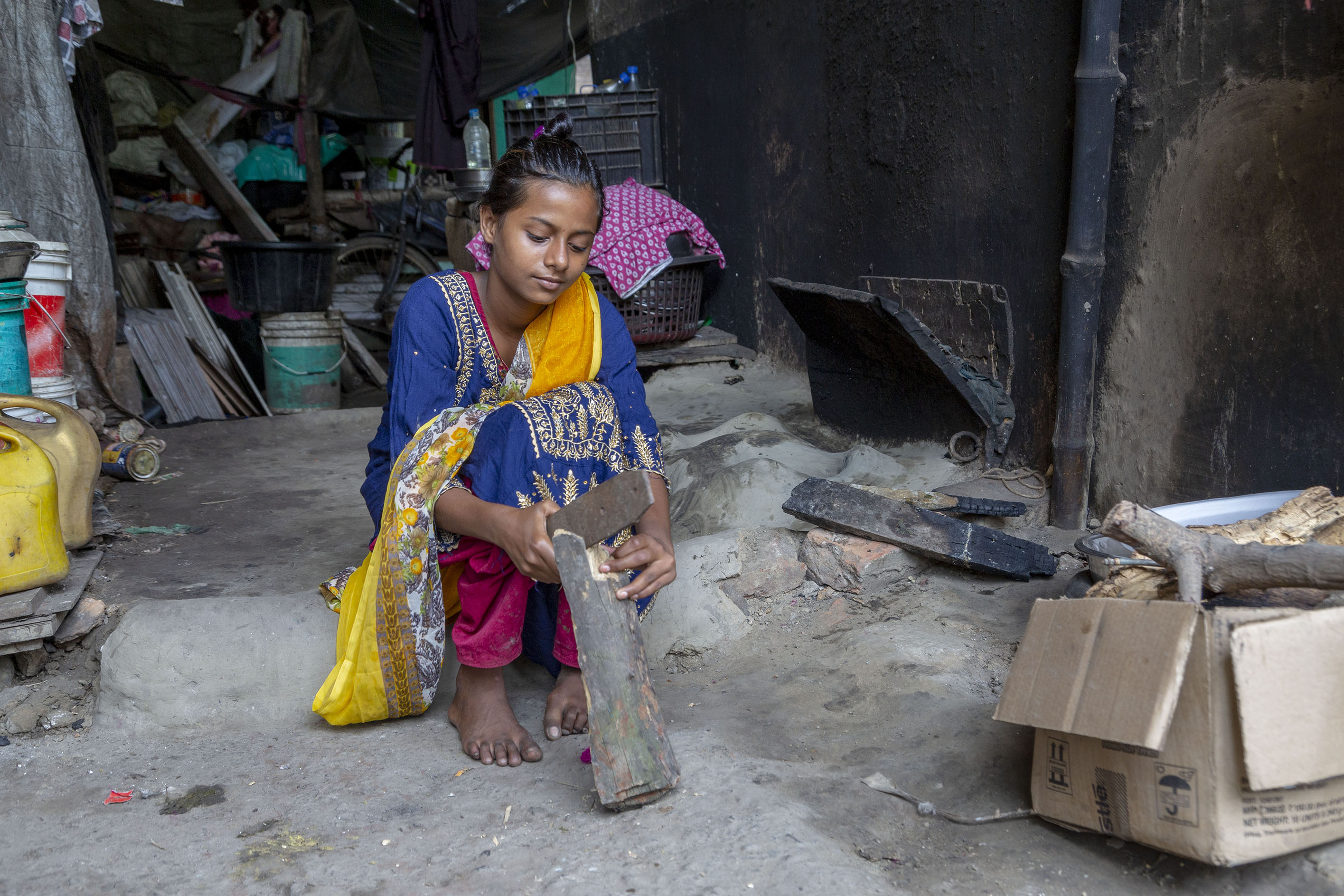 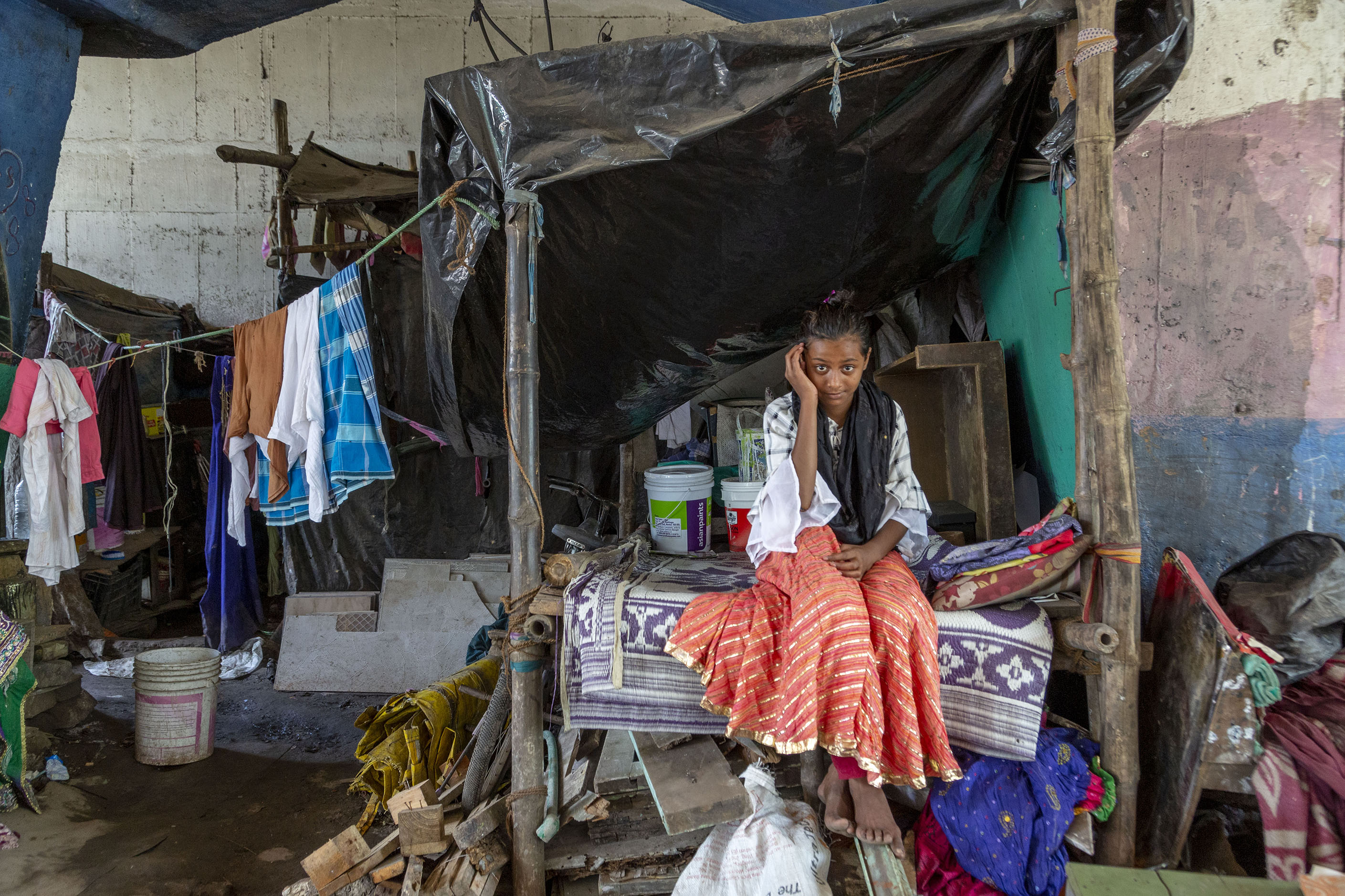 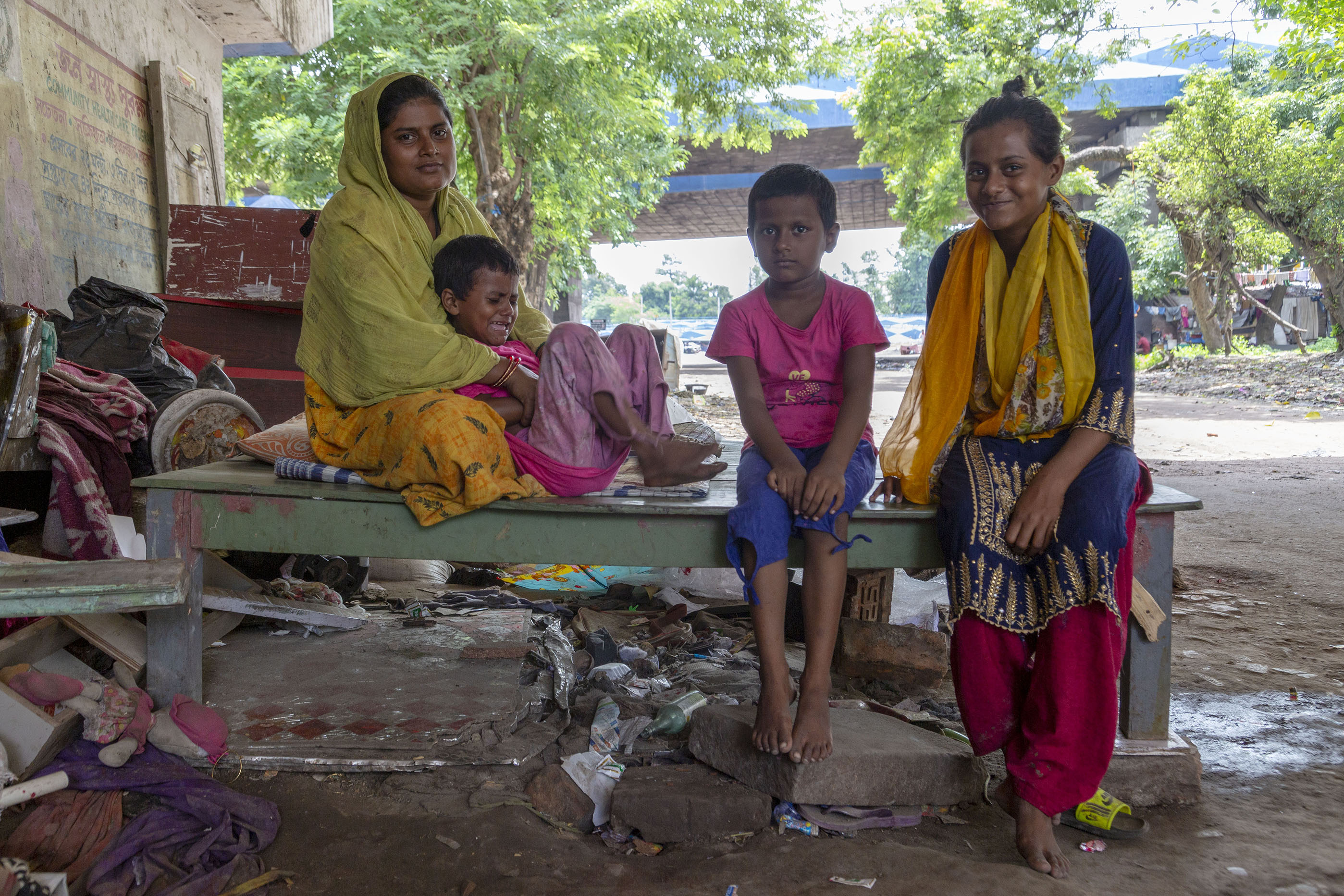 When a family living on the streets of a city includes three girls, one of them with a disability, life becomes that much harder for them. Residing in a makeshift shack below the Hastings flyover in Kolkata are 13-year-old Nasreen Khatun who is deaf, her father Sheikh Nasiruddin (35), mother Salma Bibi (30) and younger sisters Nikhat Khatun (7) and Kulsum Khatun (6). The girls have lived here since birth.

Nasiruddin’s father who worked as a helper in local hotels died when Nasir was a child. His mother was a domestic worker and now lives with his elder brother. His elder sister is married and lives with her family. Nasiruddin tried his hand at tailoring and then worked in different towns and cities as a daily wage labourer. His nomadic existence came to an end once he started a family with Salma. The couple put down roots beneath the flyover.

Starting as a painter’s helper Nasiruddin began to strike out on his own. He now takes up jobs as a house painter and also gets occasional assignments from the army headquarters at Fort William in Hastings. “My wife and I have never been to school,” he says. But they do not want their children to be deprived of a formal education. Nasreen used to attend Class 1 in a neighbourhood government school but it hasn’t reopened after shutting down during the pandemic. The couple encourages her to keep practising her lessons. “She can write her name in English and Bengali,” Nasir tells us repeatedly. Salma informs us that an NGO comes to teach children in the locality and Nasreen joins these sessions.

When Nasreen’s deafness became apparent in her infancy the couple thought it was a sickness that could be cured. After they had wasted time and money taking her to many local hospitals and nursing homes, an acquaintance suggested they take her to Delhi. They spent a further amount on travelling to the capital only to have a doctor examine her and say she needed a hearing aid. “I found out the cost of the hearing machine. I can’t afford it,” says Nasir. A person from the NGO Apne Aap Women Worldwide recently contacted them and helped them take Nasreen to a hospital in Bonhooghly where the doctor set a date for fitting the hearing aid at the end of this year.

Nasir’s fond hope is that once Nasreen is fitted with the device she will be able to speak as well as hear. He has been looking around for suitable schools and says he or Salma are ready to take her there even if it is at some distance. Salma doesn’t go out to work because she is understandably concerned about her daughters’ safety, living as they do in a makeshift shelter. “Nasreen often tells me, in her own way of communicating, that she wishes our family would live in a regular house,” says Salma. A house like her grandmother’s, perhaps. Once every few months they visit Salma’s mother who lives in a house that her own father got as part of a government scheme decades ago. Nasreen likes to go there and play with her cousins.

Meanwhile the family enjoys the simple pleasures of sharing some delicacy that Nasir would have bought on his day off, or amusing themselves in inexpensive ways, like the “big park in Salt Lake” that they recently visited which didn’t require an entry ticket. Nasir once travelled on work to Budge Budge on a bank of the River Hooghly and he quite liked the atmosphere.  He dreams of owning a patch of land there where he can finally build and settle down in a pukka house.

“However difficult our circumstances might be, we need to have faith in the Almighty and try our best to give Nasreen a good education,” says Salma. “I wish all mothers who have children with disabilities have the same faith and keep their hopes high.”