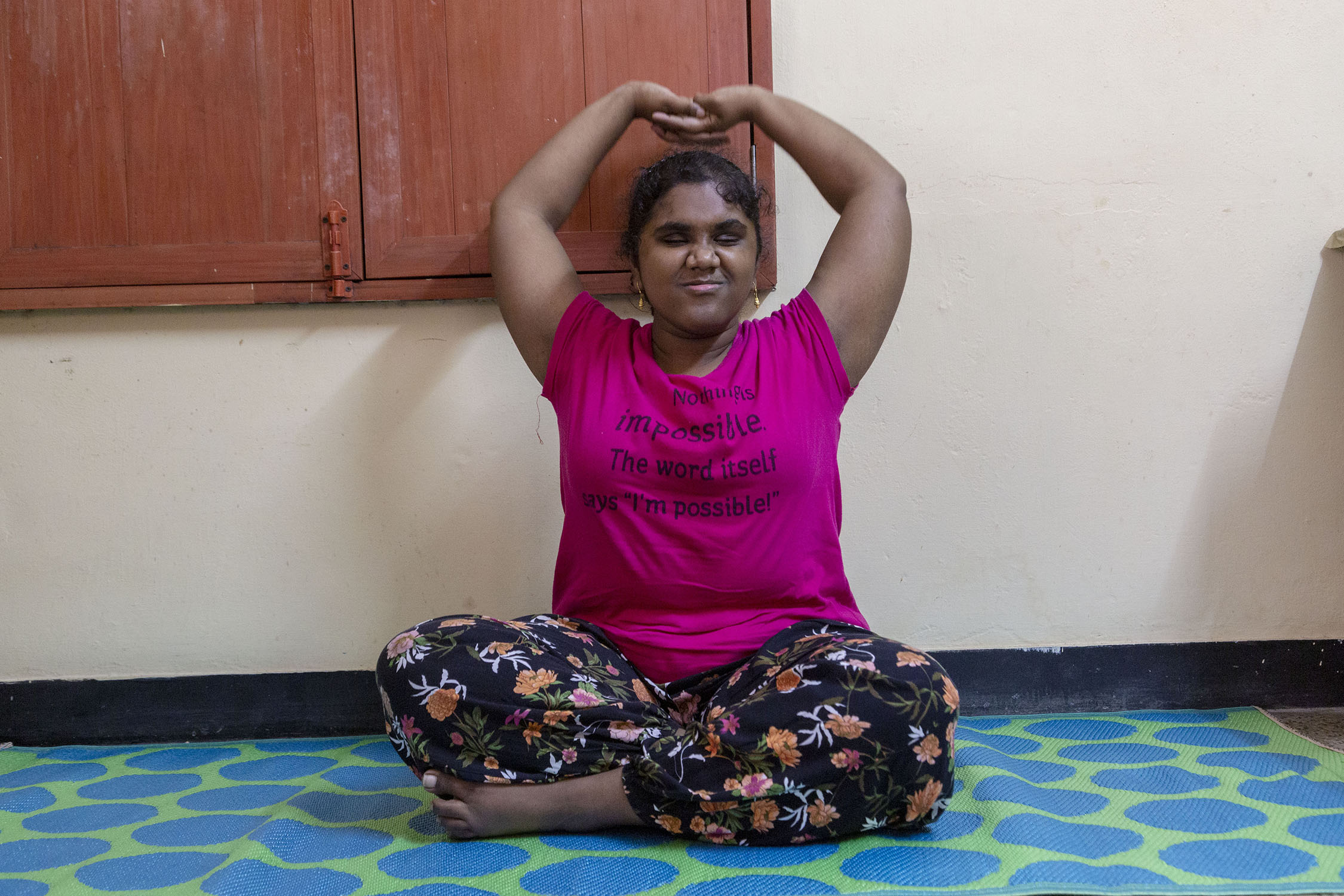 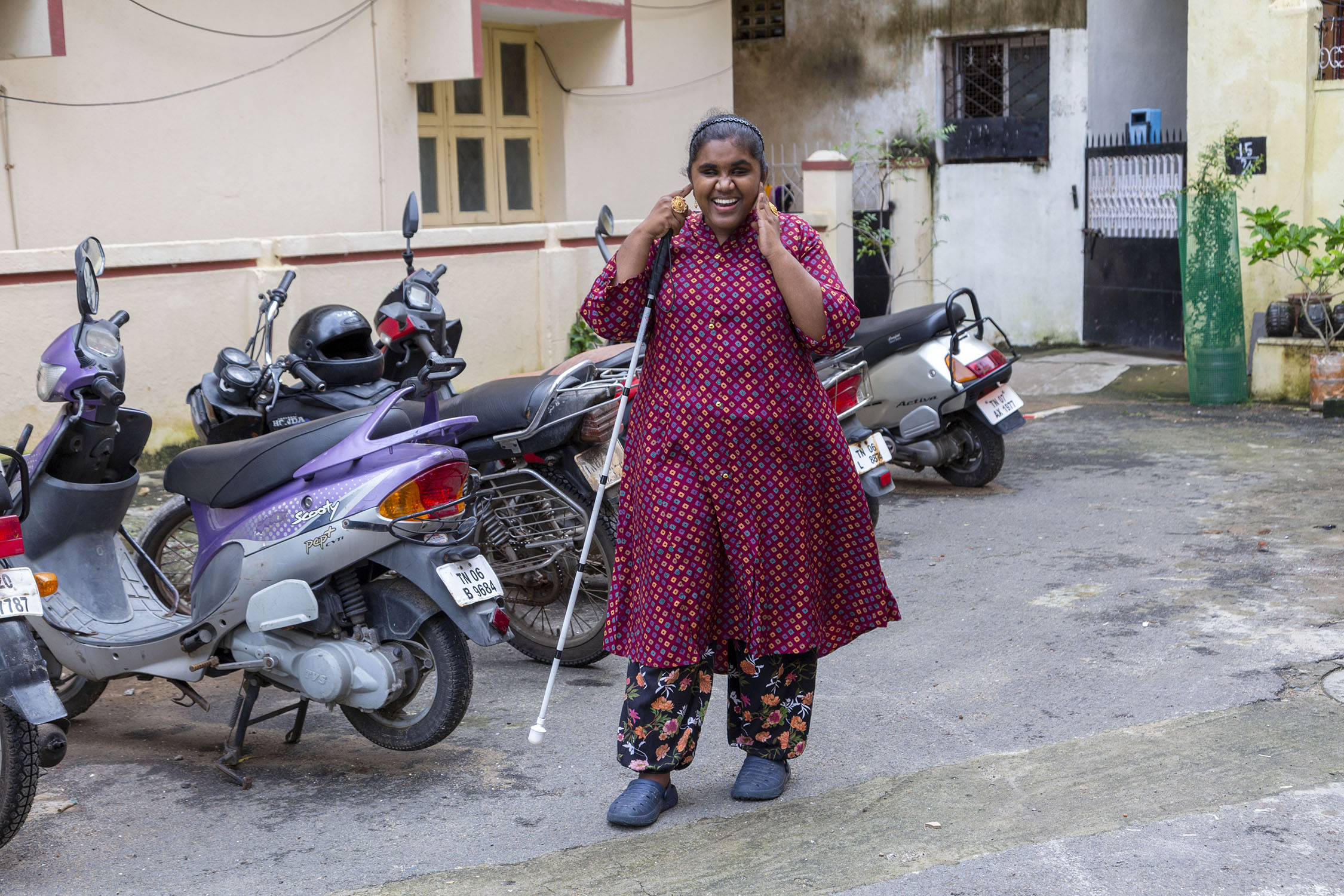 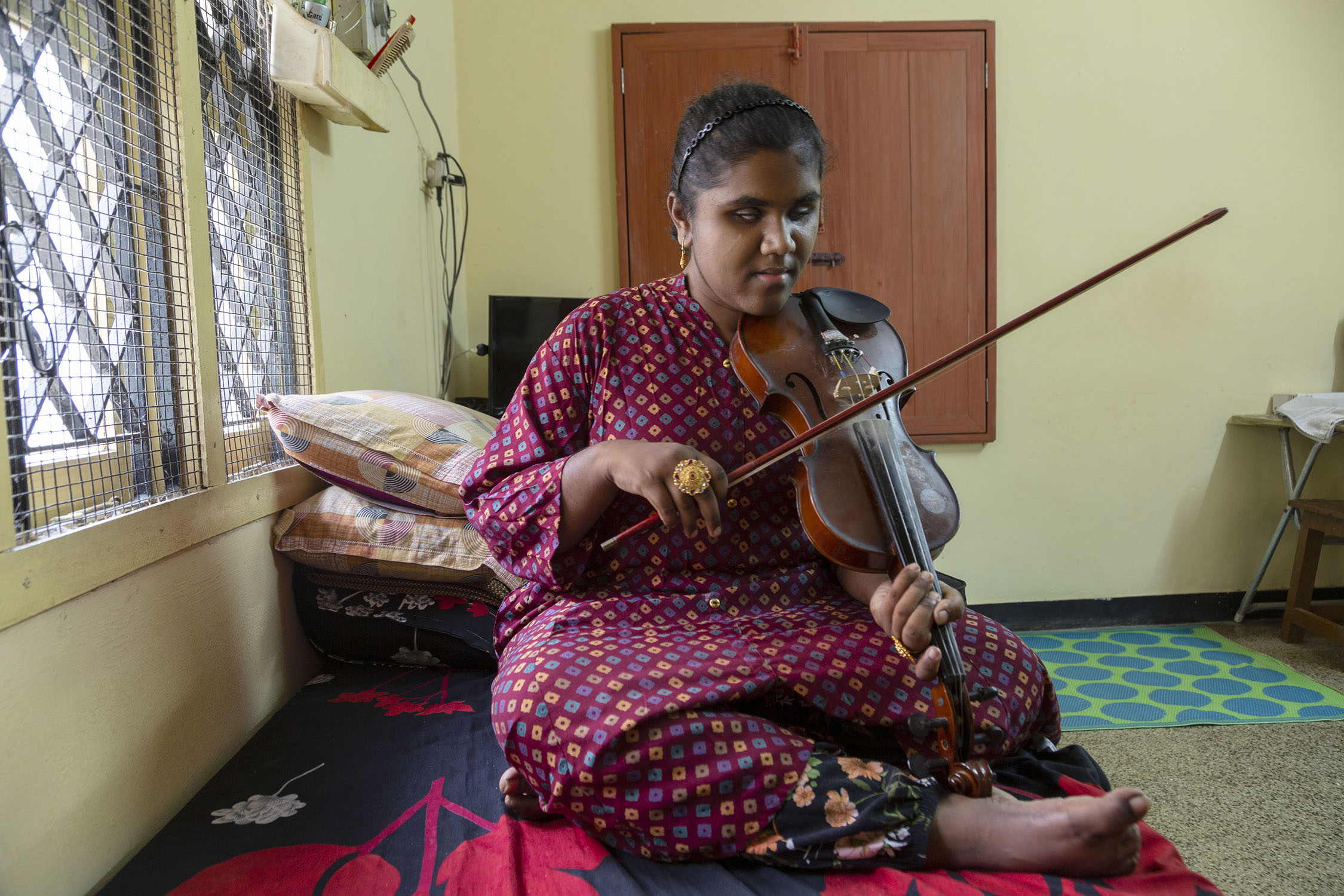 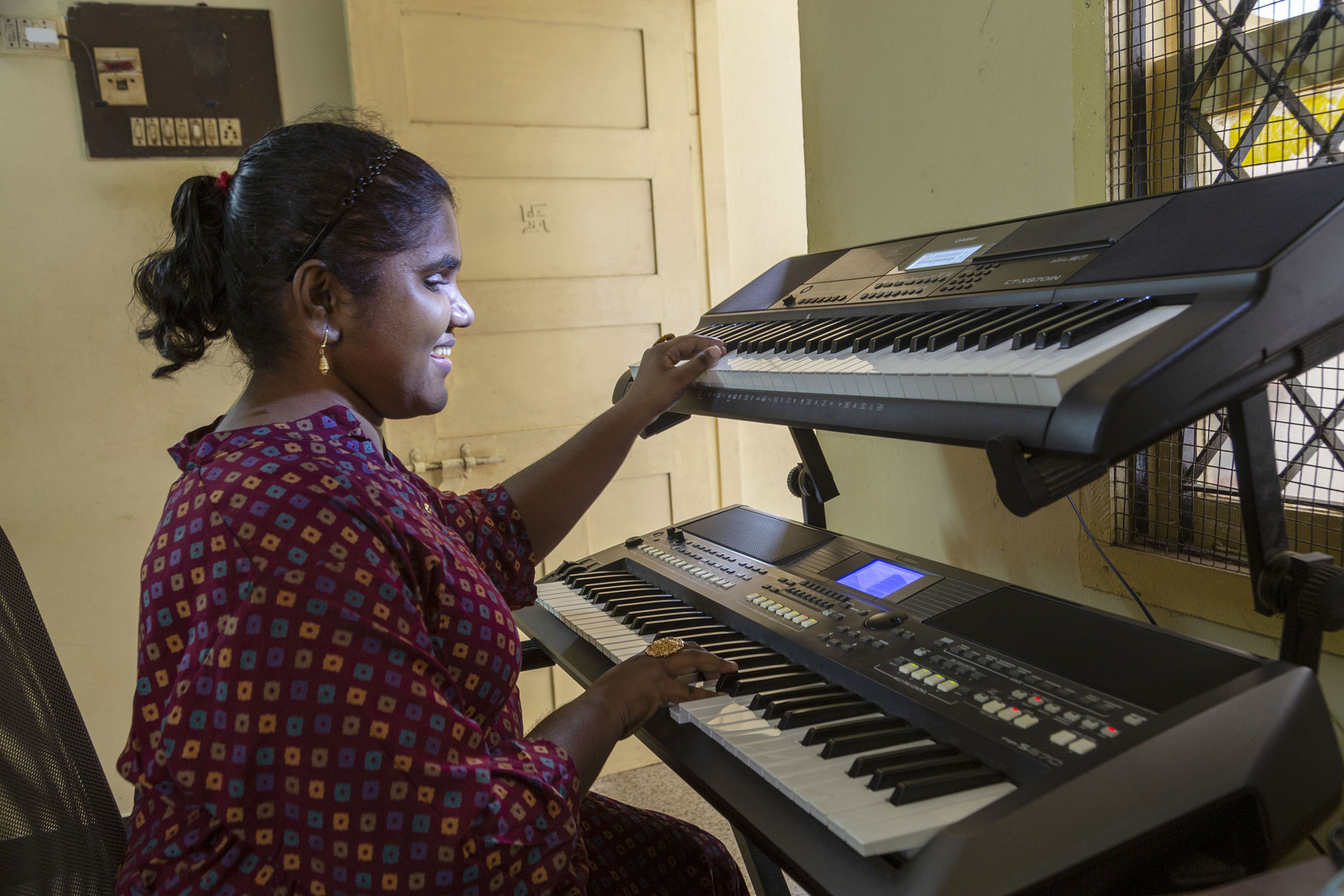 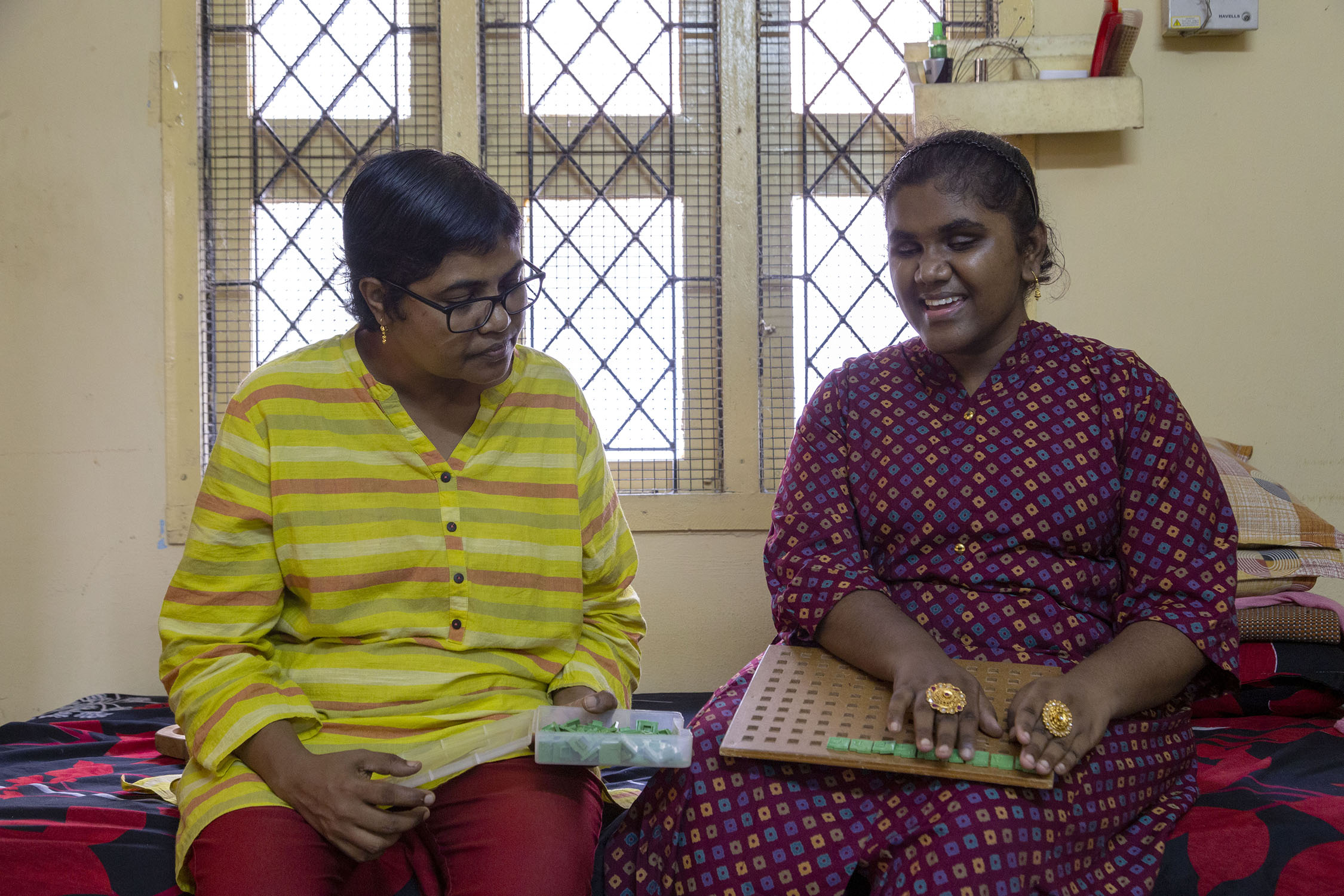 “I want to travel the world, and if possible, visit every country in the world”

When Mr Chockalingam of Chennai used to sing the verses of classical poets Subramania Bharathiyar and Bharathidasan and recite the revered Tirukkural to his four-year-old granddaughter, he noticed something unusual. She would start tapping on a steel vessel in the kitchen in perfect time and try to sing along too. The alert grandpa who spotted her musical talent died in 2017 but lived to see her become a playback singer.

Jyothi K (21) from Chennai was born blind, and when she was four, she was diagnosed with autism spectrum disorder. Her father started clamouring for a divorce as soon as he realised that his child had multiple disabilities. Unfortunately he is not an exception in India, where fathers of disabled children have been known to abandon their families. Jyothi’s surname ‘K’ stands for the name of her mother Kalaiselvi (47) who has been a pillar of strength. In turn, Kalai acknowledges her parents Chockalingam and Shantha for their staunch support – both financial and emotional. She says that whenever she was low, her father would remind her, “You have to be Jyothi’s support 24/7 and never ever give up.”

Jyothi’s behavioural issues prevented her from fitting into mainstream classrooms, and puberty increased her restlessness, but Kalai found that music had an amazingly calming effect on her. She enrolled her in a music class in a government arts college and from then onwards her prodigious talent flowered. Coached by a private tutor, Jyothi cleared her 12th standard exams but pursued music full time, completing a three-year diploma in music and B.A. in violin, and mastering the keyboard as well. She also passed her Diploma in Music Teachers Training (DMT) with distinction and is currently studying M.A. Music in Madras University.

Jyothi gradually entered the professional arena. She started getting opportunities to perform in concerts, shows and TV programmes, and accompany Carnatic musicians on the violin. Then in 2017 she was skyrocketed to fame when she went on stage to sing the cover of “Kannamma” from the Tamil movie “Rekka”, and the video got thousands of hits online. Tamil music director GV Prakash was so impressed when he saw it on Twitter that he decided to introduce Jyothi as a playback singer in his movie “Adangathey” with the song “Nilavin niramum”. Her grandfather died on 5 April 2017, just a week after the song was released. In 2019 it won the Galatta Nakshatra Award for Best Debutante Female, Special Mention.

International invitations started trickling in. She was invited to perform in Abu Dhabi, Scotland, Malaysia, Italy and Australia. She says that among her favourite travel experiences are airports, skyscrapers, and the noisy buzz of people around her. To put her DMT to good use, she put out ads on Facebook offering online music and violin lessons. Today she has students in London, Dubai and the USA.

Jyothi was proud to play in front of the President of India and the Prime Minister as part of the cultural event ‘Divya Kala Shakti’ at the Rashtrapati Bhavan in 2019. In 2021, on 3 December (World Disability Day), she received the nation Role Model award for Persons with Disabilities from the President at Vigyan Bhawan, New Delhi.

Today, Jyothi is busy juggling music studies, online coaching sessions, and concert and recording studio schedules. She also helps her mother in the kitchen whenever she can, to gain independent skills. Her latest moment of glory is captured in the [India Book of Records](https://indiabookofrecords.in/india-book-of-records-achiever-wins-national-accolade-from-the-president-of-india/) when she sang all 1330 Tirukkurals in 3 hours and 38 seconds while playing the keyboard simultaneously. Somewhere in the universe, her grandfather must have been smiling!