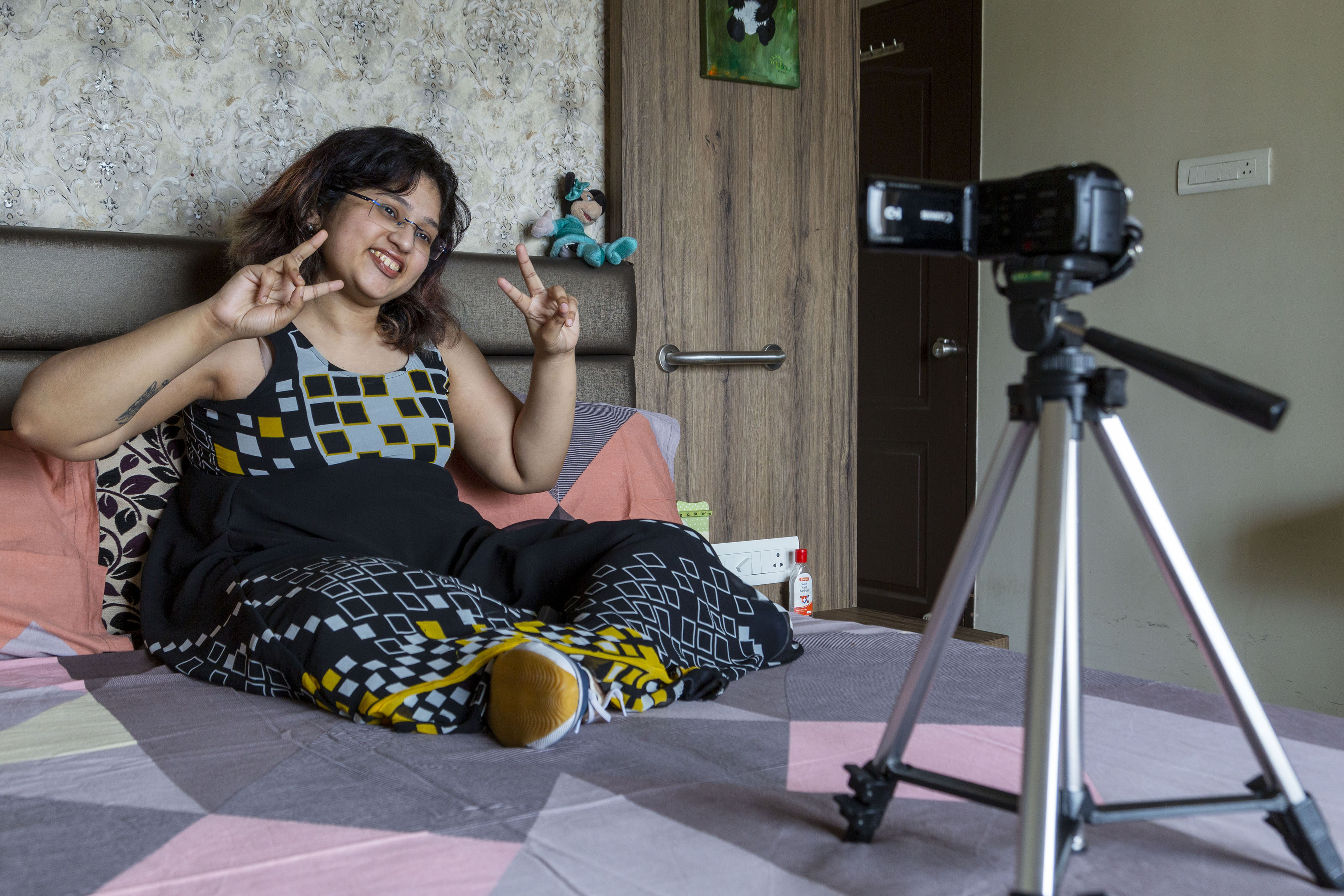 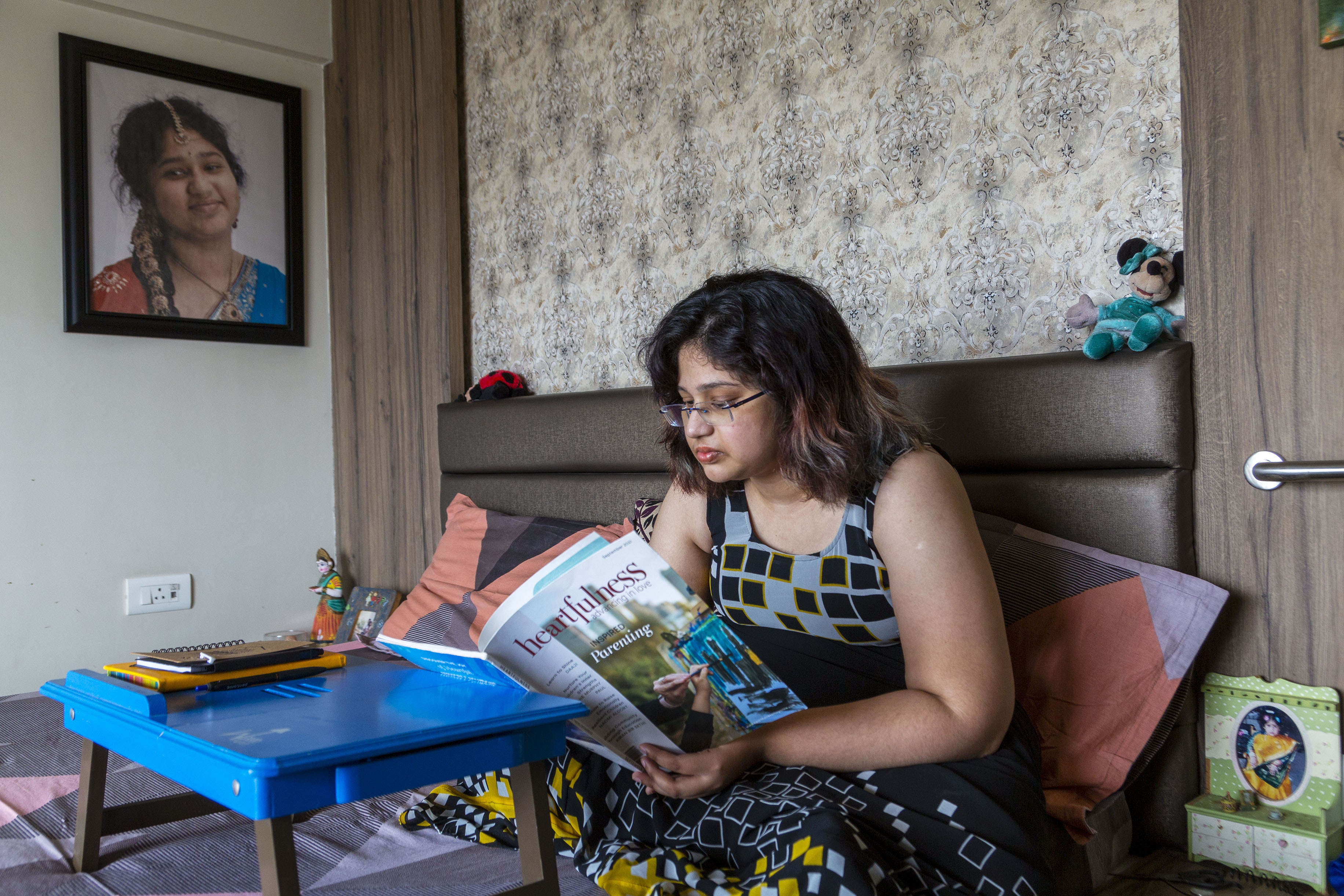 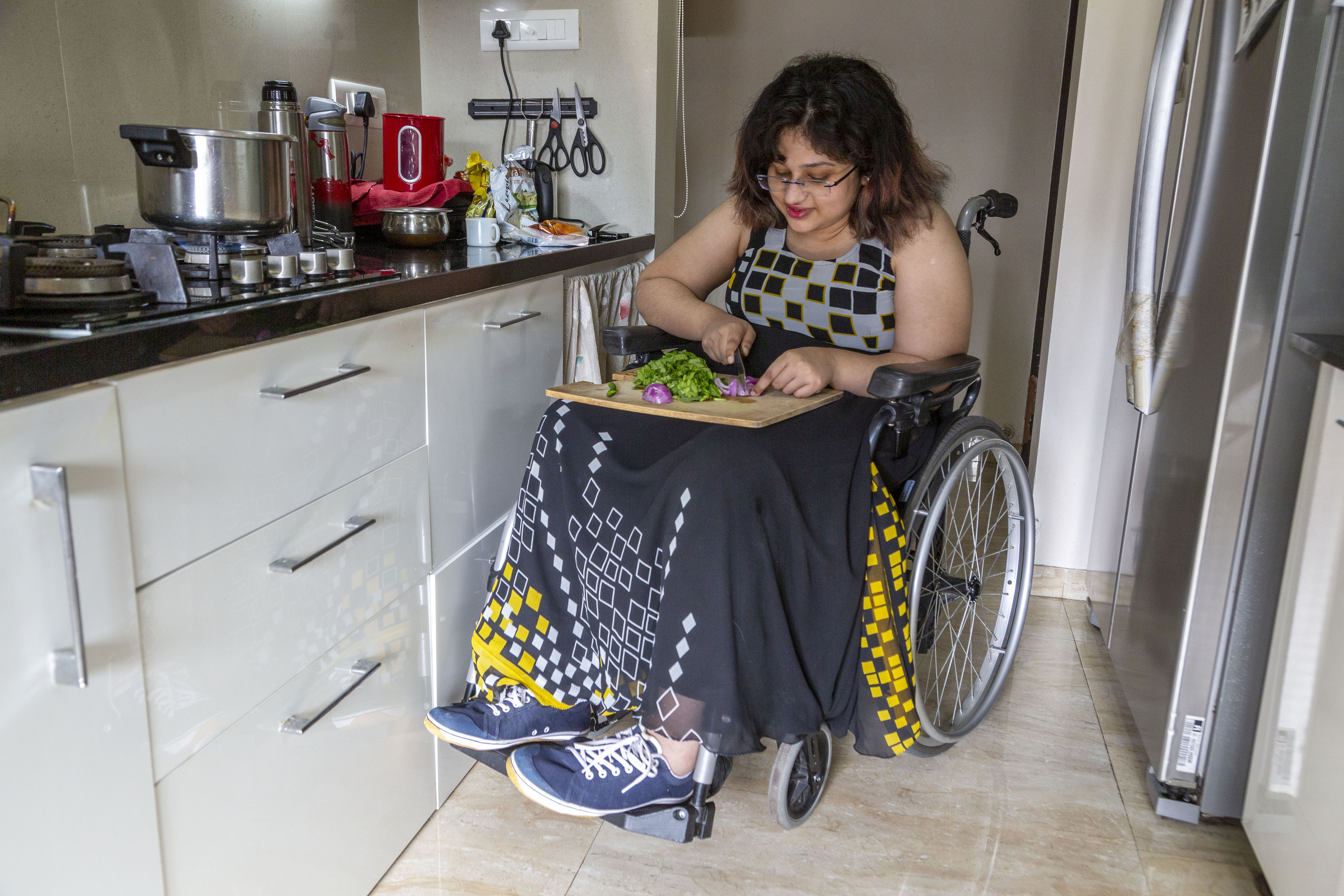 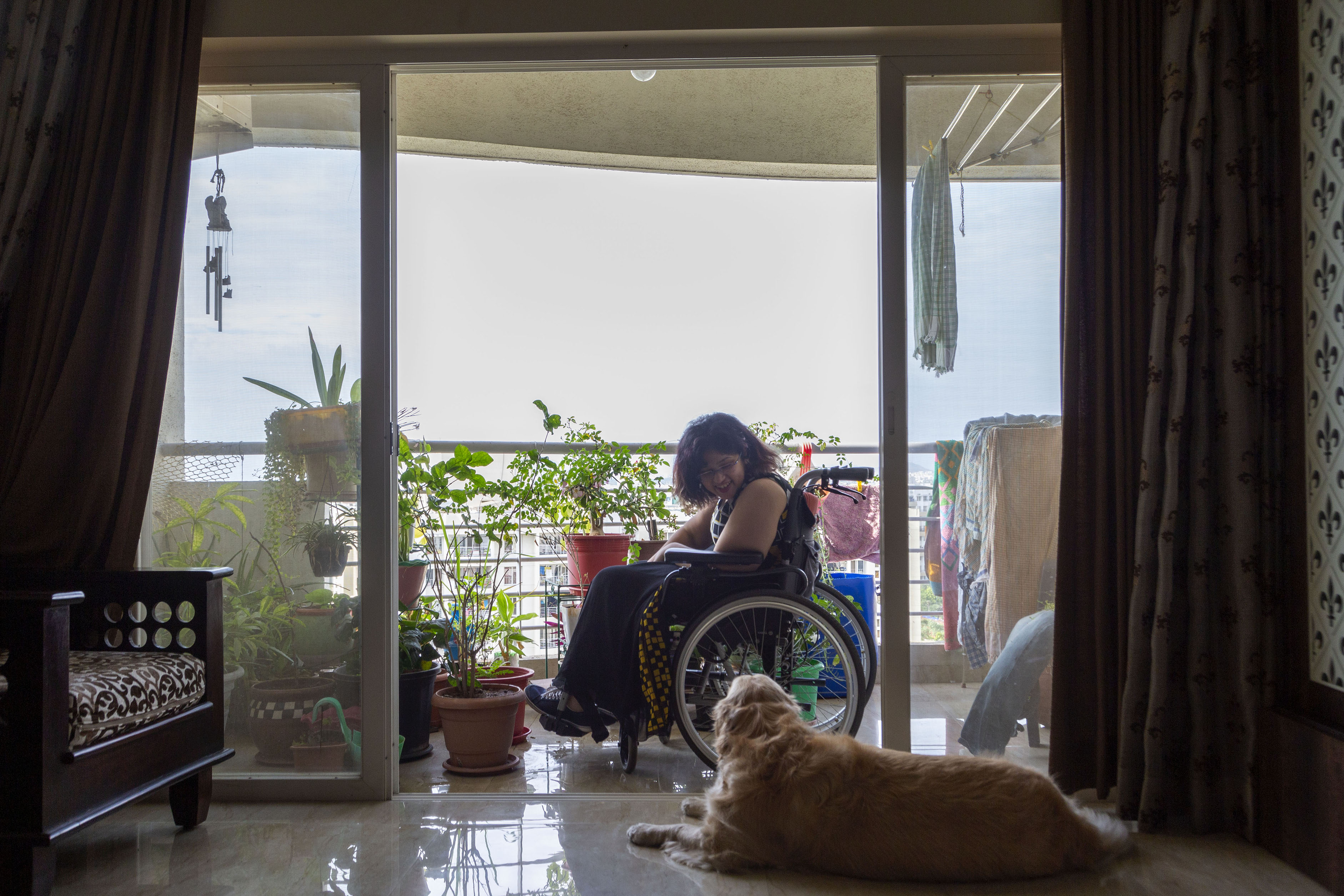 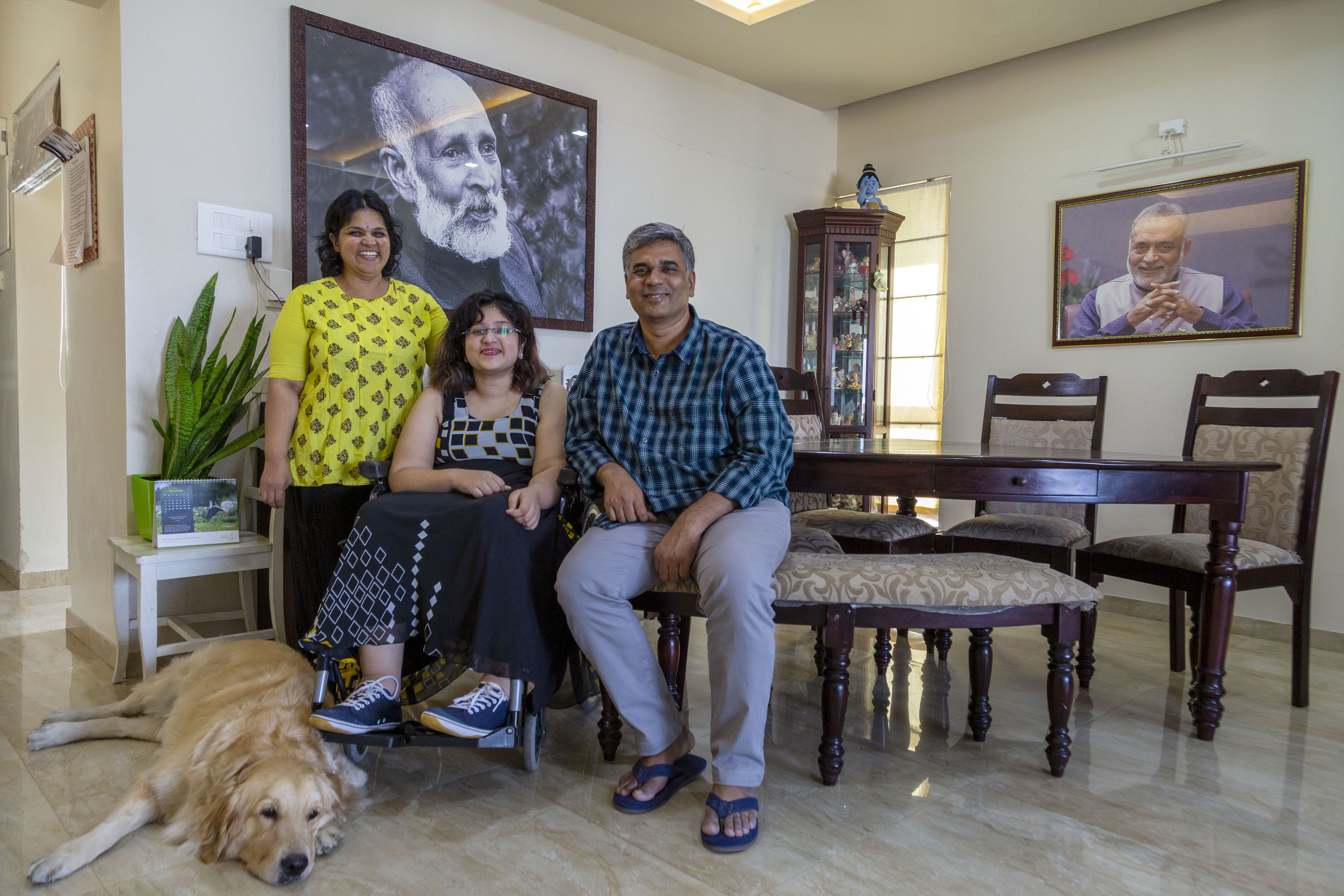 Hasitha Illa (25) has been excitedly waiting to meet her colleagues in person for the first time, a whole year after she got the job. March 2021 marked her first foray into formal employment. Synechron, where she works in their Pune office as part of the recruitment team, has a tentative plan to alter its WFH (work from home) schedule from March 2022 and start physical attendance for two days in the week. “It would be like the first day in college,” she tells us. The office has promised to create an accessible environment for her, whenever it opens.

Hasitha was born with the rare genetic disorder Friedrich’s Ataxia, which worsens over time and damages the nervous system. Nine months after she was born, in 1996 in Kakinada, Andhra Pradesh, her father Raju Illa, an IT professional, moved to the US on work, taking along his wife Sharada and their infant daughter. They had a son six years later. Hasitha grew up in New Jersey, attending a mainstream school. Ataxia typically causes loss of muscle control which results in poor balance and coordination, unsteady movements and difficulty walking. Although faint symptoms of the disorder began to manifest when she was around seven years old, she was 10 when she got her diagnosis. The deterioration of her bodily movement was gradual and so she continued to be active in school, playing football, performing gymnastics, swimming and playing the violin.

In 2011, when she had completed ninth grade, the family shifted base to Chennai and moved to Pune in 2015. Comparing the two cities, Hasitha says she relished both their cuisines, which were vastly different. “I found Chennai culturally rich,” she says. “Pune is more cosmopolitan – and the weather is better!” She completed her graduation from DY Patil College in 2019. By then she had started using a wheelchair but the college administration had provided facilities that made it possible for her to live independently in the college hostel. It was a liberating experience, she says, looking back at a time when she didn’t need anyone’s support.

However, the disease progressed inexorably. Hasitha says that even though her movement is now severely restricted she is happier compared to her early years when, although Ataxia hadn’t affected her mobility, it had taken a toll on her mental health. This is because she has learnt to accept her situation and has benefitted immensely from “heartfulness meditation”. She points out that “with losses come gains”. Instead of dwelling on what she can no longer do, she focuses on the creativity that blossomed within her as a direct result of her illness. She has her own Instagram page and YouTube channel and maintains a blog, Turning Point, on lifewithhasi.com.

Hasitha’s videos are not just informative but also entertaining, for she often sprinkles them with a dash of humour. For instance, in her video about “toxic positivity” she mimics the rah-rah style of those who mouth the “just be positive and you can do anything” cliche. Positivity taken to the next level can be harmful, she says. “Being happy, being positive 24/7 is not a sustainable goal,” she says in the video. “The more we mask our emotions and bypass them, it’ll be more difficult to heal. Just remember that there are no unacceptable feelings.”

Hasitha’s mission in life is to change the mistaken perceptions people have about disability. Besides giving motivational talks, she has also co-authored a book, “Wheeling Away”, which aims to create awareness about disability among the younger generation and inculcate an inclusive mindset in them. (Updates on the book are available at [www.instagram.com/lifewithhasi/](http://www.instagram.com/lifewithhasi/)) “A job in Recruitment is my first step into the corporate world,” she says. “And furthermore I would love to be part of the Diversity and Inclusion team.”  This would enable her to make a tangible impact in the disability space — increasing accessibility and encouraging acceptance of persons with disabilities.